by The Amarok Development Squad

The free, open-source music player that supports a lot of plugins 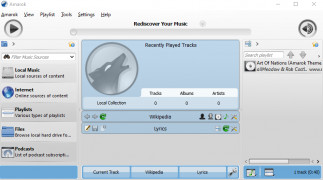 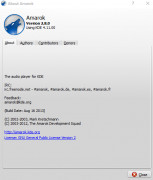 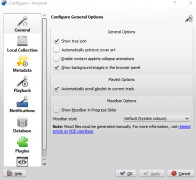 Amarok is an open-source, free to use, cross-platform music player with too many features to list, and the Windows version makes for a really nice music player that can be as simple or as technical as you want it to be. Users who want a basic, no-frills music player will most likely be just as happy as users who want a feature-rich experience.

For starters, Amarok has a more than capable scanning system, which will hunt for all songs on your hard drive and attempt to categorize them for you. Playing songs is simple, and while songs are automatically sorted for you, it's easy to rearrange them into whatever order you'd like. As songs play, you'll see whatever other info Amarok can pull, too, be it album art, lyrics, or even Wikipedia information. Of note, the lyrics actually scroll along with the song, so you can keep pace with where in the song the lyrics are. Lyrics aren't pulled for every single song, especially if the song is a foreign language, but it works more often than it doesn't, lending itself to a bit of a karaoke type experience.

Amarok also has a lot of Internet radio streams to pick through. Not all of them work, but the ones that do make this a worthwhile feature. The same goes for podcasts, of which you can find a huge number to stream, just through the player itself. Not every podcast works, but enough so that it doesn't seem like a broken feature.

In addition, Amarok also has numerous plugins, some of which are new and updated, and some of which are old, outdated, and don't work. Obviously, this is a bit of a running theme across the software. But for what you get, you still get a lot of music players. Amarok is a software that's been around since 2003, and while other music players have lost support, gone extinct, or just fallen off the map, Amarok is still running strong. There's more good than bad, more working than broken, and if you're not looking to utilize every last plugin or script (I certainly am not), then this is a more than adequate music player for everyday usage.

Features:
OLD VERSIONS
Amarok varies with device (73.77 MB)
Amarok 2.8.0 (73.77 MB)
USER REVIEWS AND COMMENTS
Robbie
Am a DJ boy, the software helps me to use for the windows and Linux OS systems, also it makes playing the music and download the new music, we can discover the new music , finally a worth downloaded software, recommended for everyone
LEAVE A COMMENT ABOUT THIS PRODUCT
VideoBox
AQ iPhone Video Converter
Wondershare Streaming Audio Recorder
StationRipper
DOT-TUNES
RELATED PRODUCTS