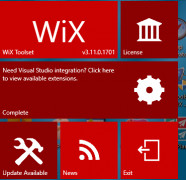 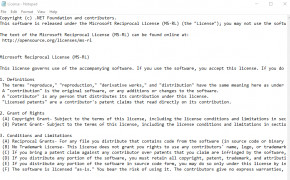 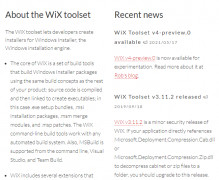 Wix is considered to be one of the most useful toolsets available to software developers looking to create installers for Windows and provide their consumers with seamless installation experience. This software toolset is free and allows developers to build installers for their software using XML. Developers use a command-line environment and can create MSI and MSM packages. Microsoft released this product in 2004, and it was the first product that was released under an open-source license and the first project which Microsoft hosted on an external website.

WiX was created by Rob Mensching, who felt like people working at Microsoft did not completely understand the Open Source community. He wanted to help them understand it by creating an example. Mensching, along with several Microsoft employees, continues to meet weekly to write code and coordinate their projects.

Supported and created by Windows.

The toolset includes Votive, which is an add-in that allows for the creation and set up of Wix projects using Visual Studio IDE. The toolset also includes components which compile XML documents into object files, takes object files and uses symbol references to link object files together, combines objects into libraries, takes MSI and MSM files and reverse generate XML documents, creates Patch files without using Windows Installer, creates file list codes from files, directories, registries, visual projects, etc. These files can be compiled and linked with other files.

Wix is the recommended alternative for Visual Studio because Visual Studio's traditional setup was removed from the application, and Visual Studio is now only available as an add-on rather than an integrated part of the Windows toolset.

USER REVIEWS AND COMMENTS
Riley
If you're looking for a way to create a Windows installation package using nothing more than XML source code, then check out the WiX Toolset, which makes that task easy! This collection of tools is a developer's dream since it gives you the environment needed in order to develop your own MSI or MSM packages. All you need to use the toolkit is the .NET Framework.
LEAVE A COMMENT ABOUT THIS PRODUCT
Fractal Forge
Wondershare Photo2VCD Studio
Artful GIF Animator
WinMorph
FILEminimizer Pictures
RELATED PRODUCTS