Software to compare files and folders and merge files 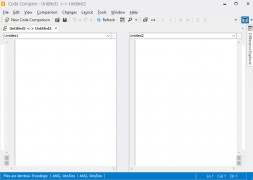 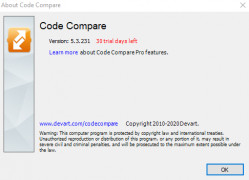 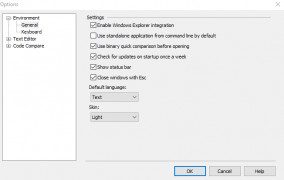 Anyone who codes for a living knows how bloated and unmanageable code can become the longer it’s worked on, especially if you’re not doing it alone. You might get back a file that was outsourced only to discover that they didn’t follow specifications or that someone had no idea what they were doing. How many times have you found yourself thinking that someone else “broke your code,” and now you have to take extra time to figure out what they did wrong and fix it again?

Code Compare was made for exactly this sort of situation. Going through hundreds of thousands of lines of code is more than a small hassle, trying to find an out of place quotation mark or lines that are plain wrong.

Instead, compare code side by side, finding the differences between files or folders in a visually simple and appealing way.

With a variety of options available, you can readily tell Code Compare to ignore certain elements like extra white space and look specifically for the things that matter. You can also compare by word, line, or symbol. It will highlight differences for you, making it easy to pick out where an issue may have been introduced.

It can also completely collapse regions of code that are the same so that you can focus on the problem areas.

It has point-and-click merging and lets you edit as you go, quickly fixing anything that needs it without the hassle. If you’re particularly advanced, you can even create your own shortcuts for merging.

Code Compare can compare C#, C++, Visual Basic, JavaScript, Java and XML, and highlights the syntax just as you would expect. It can find blocks of code that have been moved for you or any differences in the code structure.

The ability to leave comments is perfect for team projects. Programmers can leave notes in specific areas to find out if there’s some reason something has been changed or made a certain way. This makes communication easy since particular areas can be highlighted and quickly reviewed.

It can even compare up to three panes. If there are no conflicts, changes can be merged automatically. If there are conflicts, Code Compare will highlight them. Fix them quickly with the click of a mouse.

Everything within a set of folders can be compared, with filtering options if there are specific files you don’t want to include.

Code Compare works with TFS, SVN, Git, Mercurial, and Perforce. It can be integrated into any control system, so long as it supports external comparators, so it’s easily accessible.

For team programmers, Code Compare is the software dreams are made of.

Let's you easily pinpoint the differences between two files

OLD VERSIONS
Code Compare 4.0.54 (10.8 MB)
Code Compare 4.0.77 (10.82 MB)
Code Compare 4.1.78 (10.8 MB)
Code Compare 5.2.170 (16.9 MB)
Code Compare 5.3.321 (12.46 MB)
USER REVIEWS AND COMMENTS
Harrison
I work in coding, and Code Compare for Windows has made a huge difference for me, big time. Code Compare can - as it’s name implies - compare the code of two different files. So imagine you have two extremely similar (but not quite identical) files. You could search for the differences between the two files manually, but that could take a long time. With Code Compare, however, you can find the specific differences quickly and easily. As a coder, I love Code Compare. You should seriously try it out for yourself, because it turns long tasks into short ones. It’s an amazing tool and one I highly recommend.
Luke
The developer and team head are try to marge the folders and coding. its very difficult. But now it is very easy because the Code Compare for windows software is very use full for folder or code is marge and easy to compare. This software is big help of code developers. Personally I like this software. Its easy to access the software.
LEAVE A COMMENT ABOUT THIS PRODUCT
Path Copy Copy
Largest Files Finder
Portable Pulover's Macro Creator
Articulate 360
WhyNotWin11
RELATED PRODUCTS