A comprehensive solution for when you need to back up your favorite DVDs. Supports menus, subtitles, language tracks and more! 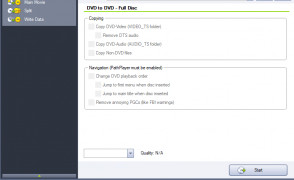 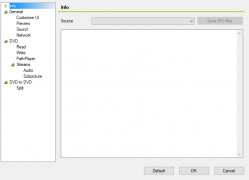 DVDFab Gold was a complete solution for backing up your DVD collection. One of many "DVD Ripper" programs, it could help one preserve films, documentaries and home movies by converting them to digital format. Such programs are useful to those who want to cut down on physical clutter, don't want to lose their favorite DVDs to time or misplacement, and those who would like to share their media with friends and family.

DVDFab Gold was a flexible solution for DVD disc backups. It allowed the user to customize their DVD copies for the ultimate viewing experience. The program could eliminate file protections, region locks, and other warning menus. DVDFab Gold allowed one to create DVD copies while maintaining the original DVD's menu meaning there weren't any awkward workarounds or plain text. Alternately, a copy could be created where the DVD jumped immediately to the main title upon insertion of the disc.

The program also allowed the user to create their copy using one or more of the included subtitles and foreign language tracks. Additionally, one could customize whether all or only some of the language variations were used. Furthermore, DVDFab Gold was able to split the DVD into multiple files. This could be used to create compact, multi-part backups for a single film or multiple backups of the same film with different language selections.

Finally, the DVDFab Gold came with the option to either burn a copy of the DVD onto another disc, a USB drive, or as a file on one's computer.

Users could use the trial version, which was free for 30 days. However, this version provided only limited file compatibility and export options. In addition to the free trial, DVDFab Gold was available in monthly, 1-year, 2-year, and lifetime versions. The 1-year and 2-year versions could be renewed at a lower price each year. According to the DVDFab website, the 1-year renewal fee was $5.99 USD, the 2-year renewal fee was $11.99 USD and a lifetime renewal was $32.99 USD.

However, DVDFab Gold has been discontinued and is now replaced by other offerings from the DVDFab company such as DVDFab 12, DVDFab Copy and DVD Ripper. Because of this, the original version of DVDFab Gold no longer receives technical support.

Create customizable backup of your DVDs.

Compatible with most blank DVD disc formats: DVD+R/RW, DVD-R/RW, DVD+R DL and DVD-R DL).
Full version allows for removal of the most common DVD file and region protections.
For use with Windows OS only.