Manage your SSD by keeping organized and up to date 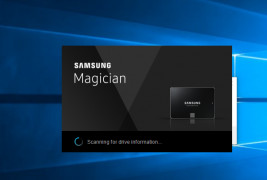 Samsung Magician is a software that allows users to easily maintain and use their SSD products without having to worry about proper organization or compromise in privacy. The software has lets users achieve twice the speed of performance using the DRAM of catching data.

First, the interface is easy to learn and very intuitive, so users can jump right in without having to learn any complicated program or language. The program also provides the user with extensive notifications, especially when new firmware is released. It also allows users to easily install updates to enhance stability and overall performance.

Samsung Magician also allows individual users to check their SSD's and random read and write speeds, so that the operating system is always at its maximum speed.

The software has an incredibly fast performance for proper optimization.

Another key component of the software is that it instantly diagnoses the drive, in case there are any problems. In addition to this, it is capable of assessing the overall health of the SSD and estimate its remaining lifespan. Samsung Magician, in addition, provides users with a secure erase, meaning that their sensitive data will properly be disposed of and discarded. In this sense, users will be virtually worry-free about a breach in their privacy. Samsung Magician also offers the S.M.A.R.T. (Self-monitoring analysis and reporting technology) feature, that will detect possible drive failure before it even happens. Users will have peace of mind knowing that their files will never be corrupted or lost forever. Finally, Samsung Magician allows the SSD to perform better and longer.

It will ultimately expand the lifespan of the users SSD and reserve any free space that the SSD has, so that its full potential is maximized and activated. To sum, Samsung Magician is advantageous because it keeps drives current and enhances drive performance, which will ultimately lead to user peace of mind.

USER REVIEWS AND COMMENTS
Alicia Sasser
This simple product allows me to keep things organized! I love how easy it is to understand, especially for people like me who only know the basics of coding and such. Everything allows me to keep tabs on my computer without feeling too invasive.
Liam Morris
another samsung website. very professional. high tech. great advertising. not to much dialogue on the page either.
Riley
I like this software is a good thing to have for the people who work consistently on their computers. They can keep up with their performance as well as the health of their drives. This software can be used by many people and be successful.
Josh
The Samsung Magician seems like a neat tool to install for those who are in constant usage of their personal computer. It seems like a no-brainer for the average person; however, for the more advanced PC user, it might not be as important of a pick-up. It greatly depends on the size of the program - if it's fairly small, then it could be a good download regardless of skill level, as advanced users will be able to do their routine optimization much faster and easier in a small number of buttons.
Finn
Samsung magician is really useful but not necessary. It is used with the SSD to optimize the drive to efficiently operate. It can run rapid mode to improve performance as well. This runs at startup and does not take a lot of resources
LEAVE A COMMENT ABOUT THIS PRODUCT
Teracopy
UltraDefrag
Defraggler Portable
HDD Regenerator
HashTab
RELATED PRODUCTS