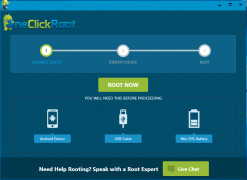 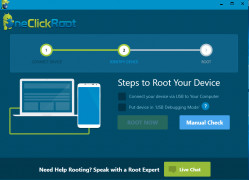 SRS One Click Root is an intuitive application filed as a mobile phone tool, created by UnlockSamsungOnline, available for Windows, and provided with an English interface. It is sized as 7827775 bytes (7.82 MB), requiring very little space in comparison with its counterpart tools. SRS One Click Root is highly downloaded and used in the United States, Indonesia, and India.

SRS One Click Root is a licensed portable freeware without any restriction that is very easy to use, provides Android data on the computer, and administers full control in a few clicks of the mouse. It can also be used as permanent function thou may be irreversible.

SRS One Click Root begins its function on a computer through a simple and dynamic installation process which unlocks an advanced feature for additional modifications. This tool requires no configuration as it basically shows the information on the phone on a computer. Thereafter, the Android device(s) is/are connected to the computer making sure that the USB debugging option is activated and the main rooting commences.

SRS One Click Root can root any Android device, be it smartphones or tablets, in as much as Android is the gadget's operating system. Its Smartroot feature is an advanced feature that helps in determining the most efficient method to root a device. The ADB Toolbox is used as the reset function for operations on user lock, gesture lock, Gmail, etc. While the easy unroot feature is an easy way for unrooting the rooted Android device previously rooted on the computer.

Rooting any phone, tablet or device leads to the void of the gadget's warranty. Thus, a user takes full responsibility once rooting is activated.

USER REVIEWS AND COMMENTS
CASS MARTIN
SRS ONE CLICK ROOT WORKS IN MANY COUNTRIES AND ALLOWS USERS FULL ACCESS TO CELLPHONE OPERATIONS. WITH EASY INSTALLATION, USERS CAN ACCESS THE ROOT FUNCTION, AS WELL AS TRIGGERING OTHER ACTIONS LIKE DEBUGGING, SIMPLE MODIFICATION TECHNIQUES, ETC. IT WORKS ON WINDOWS AND ANDROID BASED SYSTEMS.
Owen
SRS One Click Root is the perfect rooting tool for users looking to root your device. It comes with multiple exploits and is also easy to use. Customize and expand the capabilities of your device with this free Windows software, and you will be amazed at just how much you have expanded its functionality. This is recommended for anyone looking to take personalization a step further.
Aidan Haskins
a windows software for installing several installations at the same time all at once in a safe way.
Sam
SRS one click is a Windows software for managing Android software and phones from your pc.
Josh
This software helps us to root our phone in one click this app let us use the operating system of our android phone efficiently and gave full access to the android data it's like hacking our device which will give all of our mobile details and data into our pc
Finlay
Great little one-click rooting tool for android devices. I have struggled in the past with programs like this, but this one actually worked, so thank you! I will salvage all sorts of devices with this now that I finally have something that works.
Harrison
SRS One Click Root is software designed to root your phone when you need it. They made it very easy and simple to use. You can even unroot your phone too. Windows versions are supposed from XP all the way to 10. And Android versions can be supported from 1.5 to 4.2. You can even root some of the latest Galaxy phones.
Connor
One click is a rooting tool for mobile devices. It’s available only for windows and is only available in the Unites States, India, and Indonesia. It is a free app, with no limitations. The functions can be permanent or reversible. It is simple to install, and even more simple to navigate while using it. Overall, this app is very easy to use.
Jude
SRS One Click Root is a very simple tool, and It is easy enough so everyone can use it like they can use a phone. It supports most of the Windows operating systems. It is a smart root, has ADB tool box, and very easy to install with no configurations. You can use this without any restrictions because it is licensed freeware. It is also very easy to unroot any feature which is previously rooted on the computer.
John
SRS One Click Root is an application to completely root the device. When the system gets slower, it can help to reboot or basically root the device so that it gets a fresh start. It is important to back up all the data to prevent any losses during the root process. It is a stable application and yields results with just one click without having to make numerous downloads.
LEAVE A COMMENT ABOUT THIS PRODUCT
NirCmd
Bitvise SSH Client
TCPing
MTPuTTY
VbsEdit
RELATED PRODUCTS

TCPing
A good alternative to a standard ping
Download TCPing

NirCmd
A small command-line utility that is capable of doing some helpful tasks without the need for a user interface.
Download NirCmd