Movie capture tool specifically for the applications DirextX and OpenGL. 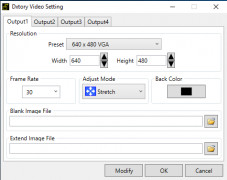 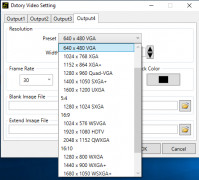 Dxtory allows you to record media from audio and video sources and save them in a multitude of formats. There is a free trial available for users who are interested as well as a paid version.

The interface of the Dxtory application is easy to use and should allow you to find everything that you would need to begin capturing your desired media. The main window of Dxtory will have a global, advanced, screenshot, hotkey, video, and audio settings available for you to start using this tool. With the standard tools that are available for use, there are also additional not so obvious ones available as well. Some of these tools are that the overlay settings can be changed to a color-coded frame and status indicators as well. There is also the ability to customize your screenshots my changing the margin, scaling, and there are even different options for clipping the screenshot as well.

Dxtory is a capture tool specifically for DirextX and OpenGL applications allowing it to record video and audio directly from surface memory, this allows for media that is recorded fast as well as being lossless in the recording. While recording audio it can be captured from multiple sources, such as from the video and your microphone when you are speaking; this makes Dxtory a great application to use from when you are gaming and wish to record, although the free version does place a watermark on the recording. Dxtory also supports third-party sources for video codes and audio. Dxtory is an easy to use application that will allow you to easily record video and audio for you to watch. This program not only records it but does so in high quality for an enjoyable viewing experience.

- Free to use for a trial period, but will apply a watermark.

OLD VERSIONS
Dxtory 2.0.133 (3.59 MB)
Dxtory 2.0.135 (5.69 MB)
Dxtory 2.0.136 (5.77 MB)
Dxtory 2.0.138 (5.73 MB)
Dxtory 2.0.139 (5.74 MB)
Dxtory 2.0.140 (5.74 MB)
Dxtory 2.0.141 (5.74 MB)
Dxtory 2.0.142 (5.75 MB)
USER REVIEWS AND COMMENTS
Xavier Long
Dxtory is a video capture tool that should of been created years ago. If you need to record audio and video from games that specifically utilize DirectX or OpenGL then this is the best program to get. You don't need to mess with special settings and there is no trial and error. You can capture from multiple sources, and is great for those who stream or upload videos to YouTube.
Daniela Beltz
Dxtory is a video and audio capture tool that lets you record media from DirectX and OpenGL applications. The software is very efficient, which allows it to record audio and video files very quickly without any data loss. This is a great tool for gamers who stream or use YouTube to upload videos.
Isaac
Dxtory for Windows is what I like best, to be honest. It is lightweight with a tabbed interface and makes it great for easy use. It also has customized screenshot capture tools to get the best captures! It is designed to capture movies and is designed specifically for DirectX/OpenGL applications. It grabs video data directly from the system's surface memory with no loss of quality.
Benjamin Padilla
Dxtory allows you to record shows and movies for later use. The recordings are very high quality, audio wise and video wise. If you want though you can reduce the quality to conserve disk space. You can also do various other things such as take screenshots, and record yourself saying things and paste it over the recorded videos.
Joshua
Dxtory is a windows software that allows us to record our gameplay live when we are playing, the program has both a paid version and a trial version, downloadable for free from the official website, Dxtory will allow us to change the graphic settings that best suit our device. In fact, through the use of specific algorithms, Dxtory will be able to determine specific FPS that will allow us to monitor the recording quality level, as phenomena such as bugs and lag, could compromise the audio visual quality of the recording .
Harrison
Dxtory is a software tool to capture movie clips for DirectX and OpenGL applications. It supports the windows for capturing the movie. It has high-speed memory capacity and it has an only a small load for storage. It records the video data directly from the memory. Data is captured from the memory surface buffer so that data will not be lost. the feature of the Dxtory is the multiple audio sources recording.
Alexander
This is one of the better screen recorders out there. It can do avi, wmv, flv, mpg, mp4, mov, and others. MP4 is a must-have for me. I also like the mouse highlighting feature for presentations. But the best part is, it can do overlays! Other cool features include: adding your own captions, replacing backgrounds with green screens, and more.
Ryan
Dxtory for Windows lets you capture movies using DirectX/OpenGL applications. It is a lossless capture of original pixel data. It seems that you also need to use other program to remove the watermark on the resulting video, however. It may not be for a complete beginner.
LEAVE A COMMENT ABOUT THIS PRODUCT
Streamlabs
AoA Audio Extractor
Primetime Podcast Receiver
iSpring Free
DivX AntiFreeze
RELATED PRODUCTS

FlipShare
A program integral to every Flip video camera allowing you to easily share all of your experiences!
Download FlipShare