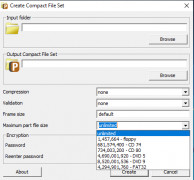 Pismo File Mount can be used in many different kinds of applications.

Pismo File Mount is available for Windows, Linux, and Mac and can be implemented in many programming languages, including C, C++, CLR Languages, Java and JVM.

Pismo file mount comes with a command line interface.  The "cfm" command works from a command or terminal prompt.

The Pismo File Mount audit package demonstrates what the operating system extension can do, and is a useful application in and of itself.  The audit package facilitates the mounting of container files as read-only or read-write volumes.  The audit package was created with the same tools that are provided to third-party developers.

USER REVIEWS AND COMMENTS
Billy Dean
Pismo is a great little program. I needed something to show virtual drives and this one works really well. It allows you to mount what you need fast and easy. If you are in need of a virtual mount program get this one now!
Samuel
Make your own virtual file systems no matter what operating system or programming language you're using. The computer sees the virtual files as mounted files, making everything that much easier. Plus you can control it all with a command line interface that puts the power at your fingertips.
George Montoya
a windows software for managing software and multitasking and editing files types.
Jamie
I was looking for a software that will let me launch my virtual files. Pismo File Mount for Windows does just that. I downloaded it for free. I use it to mount the virtual units without expansion of my zip or iso files. The interface is so easy. Sometimes I just want my files expanded. I am happy with this.
Ethan N*****w
Pismo File Mount is software that allows users to mount files and folders from archive files, such as ZIP and ISO, as virtual folders in the Windows file system. This makes it easier to access and manage the contents of these archives without having to extract them first. It also allows users to mount encrypted archives and access their contents securely.
LEAVE A COMMENT ABOUT THIS PRODUCT
HashMyFiles
FAT32format GUI (GUIFormat)
WinDFT (HGST Drive Fitness Test)
MobiFiles
1Tree Pro
RELATED PRODUCTS