A free open source TFTP server and client for Windows 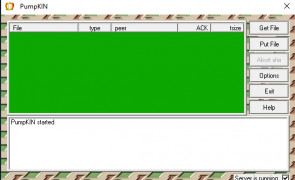 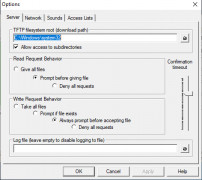 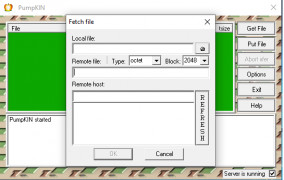 Pumpkin is a free, open-source application that uses TFTP (Trivial File Transfer Protocol). Pumpkin has a simple, straightforward graphical user interface and runs on all Windows systems. Pumpkin allows the transfer of large files simultaneously between a TFTP server and client.

The primary use of Pumpkin is for the maintenance of networking equipment such as a router firmware upgrade that uses a TFTP server to fetch images. Pumpkin is also useful for transferring files between parties over a talk connection for conversation. Most of these features are currently found only on Windows.

An important thing to know is that Pumpkin is not an FTP(File Transfer Protocol) server, nor is it an FTP client. Pumpkin is a TFTP server as well as a TFTP client, and they function on different protocols. TFTP is used mainly to transfer files to and from network hardware(such as a router, hub, switch, backup and restore options) as long as the networking equipment supports TFTP. This is unlike FTP that is mainly used for serving downloadable files or retrieving files from other FTP servers around the world, basically meaning general purpose data exchange.

Another explanation of TFTP is that it is an Internet software utility that is used to transfers files in a much simpler way as compared to FTP. TFTP, unlike FTP, can be employed where user authentication and directory visibility are not required.

Currently, Pumpkin TFTP is free and open-source for everyone to use and edit, with its creator daring all to "punish" it as much as they want and make it better. Pumpkin comes in a light package of a file size as large as your wallpaper.

USER REVIEWS AND COMMENTS
Sam D
Pumpkin TFTP is a free open source TFTP server and client app on windows and MAC! Makes it super easy to transfer all of your files.
John Goss
Pumpkin TFTP for Windows is brilliant software that allows you to use its protocol to transfer files from one computer to another over a network. I love how simplistic it is to use and the aesthetic of the windows are very visually cool to look at. Its easy for people of multiple computer skill levels to use and is also useable on Mac, not just Windows.
Jack
I love Pumpkin. It's open source and a fully functional and free piece of software for the TFTP client and server. I can implement block file transfers. I downloaded it then got my company to use to it to maintain the network equipment. It's a windows product only but that's fine. My company only uses windows. The unlimited simultaneous transfer makes it a powerful tool.
Luke
This is an open-source software it is used for client-server communication. We can use this software to send large files to the clients used to transfer the information and it has the download and installation is very simple. This software is mainly used in companies and in the group communication process it can access 32 bit and 64-bit windows then it is the graphical user interface and runs on all windows system it is used to network transfer such as router, hub, the switch has the networking equipment support. This can generate and manage communication like images, videos, any information which has a huge number. It is a very useful software and free to access.
Samuel
The Pumpkin TFTP for windows seems to be not only a reliable software but also needed. I work in the corporate world where we constantly transfer files. Having a system where I can safely send files takes only a couple of clips. It is also great to have the ability to customize the setting of Pumpkin. It is not difficult to operate which I appreciate.
LEAVE A COMMENT ABOUT THIS PRODUCT
Home FTP Server
Core FTP Server
Tftpd32
Golden FTP server
Serv-U
RELATED PRODUCTS