An antivirus software for Windows 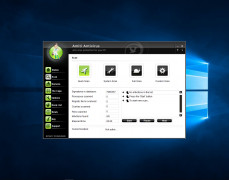 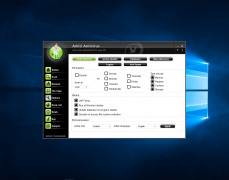 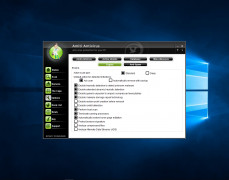 Amiti Antivirus is antivirus software for Windows that protects against viruses, worms, trojans, and malware. You can scan, or even schedule scans in advance to see if you have any of these so you can remove them from your computer.

It has a clean to use interface, that's easy on the eyes with a subtle green and black color scheme, and everything is well laid out and easy to find accordingly.

Another great feature is it has automatic updates, that let you know when it's ready for the new update to be released for download. A major downside is it doesn't provide a built-in firewall of any sort, so it leaves you hanging on using the Windows Firewall or whatever default firewall you have.

The good thing is it's compatible with Windows 10, Windows 8, Windows Vista, and even the legendary Windows XP. Amiti Antivirus can update up to every 60 minutes because let's face it there are always new viruses, and malware being made and discovered. So this is actually a really good solution to prevent even the most recent of finds. Quarantined files are kept in a folder called "The Cage" so you can restore or permanently remove files marked as infection at your own leisure. Unfortunately, it doesn't have any sort of USB or email scan settings so you'll have to find an alternative for that.

The major selling point of Amiti Antivirus is it completely replaces other leading default software like Norton Antivirus, and McAfee by having a database that updates and it's completely free of no charge for the added updates.

Amiti Antivirus uses real-time memory shields to take action when action is needed. Overall I would say it definitely is better than the default alternatives lying around that are more outdated, so definitely give this one a look when you have a chance!

USER REVIEWS AND COMMENTS
Aidan
Amti antivirus is very best and user friendly software that keep your pc in good condition.it has real time memory shield and it can be supported on both 32 bit and 64 bit.scans run automatically to protect the system from the viruses.overall from my usage i am good to keep this as my pc's antvirus software.
Luke
Amiti Antivirus is a free antivirus program for Windows users. It works to fights against viruses and other malware. You can schedule which things you want to be scanned on different dates and times. It doesn't use much RAM either, so it doesn't slow the computer down while in use. Besides scanning the computer, it can also be used to remove the threats that it does find.
Alfie
Amiti Antivirus is a reliable and very advantageous option to scan and protect computers from viruses. It allows to customize scans excluding certain programs. Thus computers can be easily kept safe. Moreover, it informs the user in case of risk. At the same time, you can protect your data and personal information. Having different scanning options such as quick, full, custom for computers provides an alternative for the user.
Charlie
Amiti Antivirus is an antivirus tool with various special functions. It allows for quick scans, full scans, and custom scans. If after a scan Amiti Antivirus has detected a problem it is sent to "the cage" where you then have the option to delete the virus. It has been rated 4.29 out of 5 stars which means it is highly recommended. This program supports Windows 7, 8, and Windows 10.
Luke
The Amiti Antivirus for Windows is a great option for those who want to protect their system. It is free and works on OS from Windows XP to Windows 8 (32 and 64 bit). This antivirus has a user-friendly interface, works in multiple languages, and protects your system from viruses, Trojans, worms, and malware.
Lewis
The Amiti Antivirus for Windows is a great tool to use for combatting unwanted threats on your computer. The software enables the user to select specific folders to detect threats and viruses. It is then possible to delete certain files that may do harm to your computer. This antivirus program scans and protects data to give users the optimal experience on their Windows program and have peace of mind for safety.
Matthew
I really like the color scheme and layout of the software, and feel as though it stands out compared to other anti-virus systems. As somebody who browses the web often, I am at risk of getting viruses, the detection systems in place help me to avoid any potential problems. I also love how simple and easy to use the layout is, a lot of anti-virus software's I've used in the past have been quite complex however Amiti is very easy to use and I can comfortably navigate its different features.
LEAVE A COMMENT ABOUT THIS PRODUCT
W32.SQLExp.Worm Removal Tool
WinPatrol WAR
Virus Killer Pro
ClamWin
Titanium Maximum Security
RELATED PRODUCTS