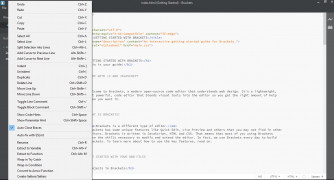 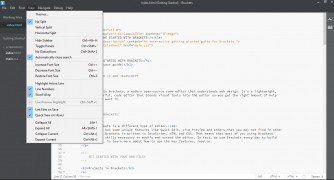 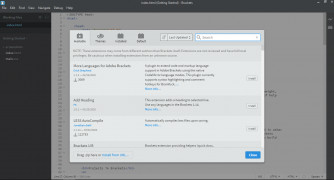 Brackets is a code editor for common languages, such as JavaScript, HTML, and CSS.  It includes things such as live preview, which allows you to view your code in action locally without having to deploy the code, and code completion which helps complete code even if you don't remember the exact syntax for it.

Whenever I'm coding anything, whether it's a web app or a website, I like to keep things organized.  With other editors, such as Notepad++, it's fairly straight forward but doesn't include a lot of things that I'd like.  Brackets has a clean interface that is really intuitive and has a bunch of different options that aren't invasive.  The most important thing, in my opinion, that sets it apart from the other available options is the live preview.  Whenever I'm working through a project, I'm able to launch the live preview and it shows everything I have, just like it would appear once I published it. I'm also not the best coder around, but I make do.  Because of that, the code completion allows me to code while not always knowing the right syntax.  Before, I'd have to get on Google and search each time I forgot exactly how something as supposed to look.  This is available in some other programs, but with the other aspects of brackets, it turns it into the perfect code editor for me.  Prior to finding brackets, I solely relied on Notepad ++, since it was free and simple.  But, I am now an avid user of Brackets, and will continue to recommend it.  Another plus is that it's open source, so if there's something you want to see in it, all you need to do is code it.

Live preview allows you to see your code in a browser as you type.

USER REVIEWS AND COMMENTS
Joseph
A beautiful modern open-source text editor, Brackets for Windows, has all the features you want while maintaining a lightweight and ultrafast footprint on your system. Written in Javascript, this software will help improve your daily workflow. From inline editing to prevent having to tab between multiple files to have a live preview in the browser, Brackets for Windows will change the way you write code.
Aaron
I've worked creating websites for years and this is one of my favorite programs. This editor is really user-friendly and easy to use, the best of any free app. It helps me code, but also access different extensions easily. The quick-edit is my favorite function and makes changes so much more smoothly than other source code editors that I have used in the past. It can be a little slower, but the features are definitely worth the hardly noticeable speed issues.
LEAVE A COMMENT ABOUT THIS PRODUCT
ProWritingAid Desktop
SourceTree
BYOND
Genymotion
GitKraken
RELATED PRODUCTS