A multiplayer RPM game that relies on teams to kill monsters 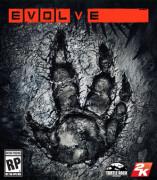 The Evolve game is an asymmetric multiplayer game, that was developed by Turtle Rock Studios responsible for the massively successful Left4Dead series. In which the player as either one of a team of hunters, or belong to monstrous. Each hunter has their own specific role, with some focusing on support while others find preys or heal damage. In this game teams of four players take on an ultra-powerful monster that evolves over time. the game features a variety of maps for players to hunt down and ultimately kill beasts.

It's interesting psychology in practice playing this game -- where you'd think players would just want to assume the role of an all-powerful behemoth that obliterates anything it sees. In Evolve, you just feel appealing to play as a team member since only with cooperation you will be able to defeat the monsters

you are able to play offline where you can hone your skills and more easily understand each player responsibility and the pros and cons of each role/class. There's not a lot of hand-holding in Evolve, so the more time you devote to learning offline, the better your online performance and experience will likely be.

Each different Evolve game mode within takes you a bit of replay before it starts to make sense, even after checking out a video tutorial, but there is the need for you to play enough offline in order to become a true fan that can contribute for the success of your team

As a conclusion, Evolve the game is killing the scene at an unusually sluggish time and offers something you likely haven't seen before. The game even offers an official "campaign" mode, where you can truly enjoy the storyline of the game. Even if there's barely a semblance of a storyline, Evolve's depth and longevity provide more than enough value for what it is.

OLD VERSIONS
Evolve 0.9 (0.46 MB)
Evolve 1.8.10 (3.11 MB)
USER REVIEWS AND COMMENTS
Luke
Evolve can let you play offline to better your skills before joining online multi players capabilty of playing 4 people in teams and good graphics
Caleb
Evolve is a interesting take on the multiplayer gaming industry. I love the team dynamics of the game and I really enjoy playing the monster. It's fun being able to attack the good people and play as a bad guy. I love the graphics of the game.
Ollie
WOW!! Evolve for Windows is a RPG game that has multiplayer team options as well the chance to BE the monster! This game has buildable characters with skills and stats comparable to other RPG games on game system platforms. It really takes team work to a whole new level.
Reuben Fender
Evolve is an application for video game lovers. It gives users a meeting place where they can play games together, share information, and simply hang out. Evolve's interface is divided into two basic parts: the client, where you can manage your friend list, groups, and stats; and the browser (integrated in the client), from where you can access information and forums about all the games you want.
Robert
Evolve is a simple and the best application tool which is used for play video games together with friends. Most of the people, love to play video games and some others want to play video games with friends or social groups. This application tool helps to meet with friends or social group in a single place and play together with all. When playing with friends or group, we can share information using chat program. This software application is compatible with all types of Windows Operating Systems.
Ryan
I loved this game! I've always been a fan of these types of games. It's so addicting and looks great. The first day I got it I played it for hours.
Owen
Evlove is a shooter video game, and multiplayer game. It is inspired by hunting game. It focus on co-operative and competitive, comes in 2K games. Evolve was developed by Turtle Rock Studios. It was released worldwide. The game is set a fictional future, humans have find out ways to live outside the earth, and began colonizing other people. When the colonization progress, human began to meet battle from alien or Monsters.
LEAVE A COMMENT ABOUT THIS PRODUCT
Arena of Valor
Brawl Stars
Plants vs. Zombies
RELATED PRODUCTS