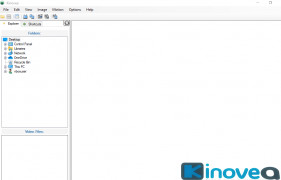 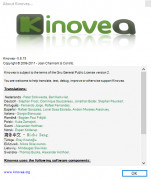 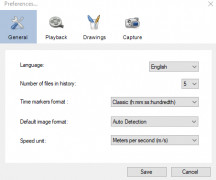 Kinovea is a video analysis program that allows users to capture, analyze, and compare motion data. With Kinovea, users can easily capture motion data in a variety of ways, including via a webcam, a high-speed camera, or a specialized device. Once the data has been captured, users can easily analyze movement in a variety of ways, including graphically, numerically, and statistically. Additionally, users can compare multiple performances side-by-side, and even overlay multiple performances.

Kinovea is an easy-to-use program that can be used by both experienced professionals and novices to capture, analyze, and compare motion data. It offers a wide range of features, including:

• Video Export: Kinovea allows users to export their data in a variety of formats, including AVI, MPEG-4, and QuickTime.

• Collaboration: Kinovea allows users to collaborate with others on their motion data.

• Multi-Platform Support: Kinovea is available for Windows, Mac, and Linux.

• Operating system: Windows 7, Windows 8, Windows 10
• Processor: Intel Core i3 or better
• Memory: 4 GB RAM
• Graphics: DirectX 9 compatible
• Hard drive: 100 MB of free space
• Monitor: 1280x1024 minimum resolution
• Input devices: Keyboard, mouse or other pointing device
USER REVIEWS AND COMMENTS
Isaac J*********n
I have been using the X-Kinovea software for some time now and I find it to be an extremely useful tool for analyzing and viewing video. The features are quite varied and intuitively laid out making it easy to quickly learn and use. The ability to easily measure angles, distances, and speeds is also a great plus. The ability to record and analyze my own video is also really useful. I also find the comparison mode very helpful in seeing the differences between two video sequences. All in all, X-Kinovea is a great software for anyone looking to do video analysis.
Noah O*****u
X-Kinovea Software is a great tool for analyzing video. It has an intuitive user interface and is easy to use. It has a wide range of features, including different analysis options and the ability to export data. The software also provides detailed instructions and tutorials to help users get the most out of it. It is also available in multiple languages.
LEAVE A COMMENT ABOUT THIS PRODUCT
VideoSolo DVD Creator
Movavi Slideshow Maker
Video Rotator and Flipper
SubiT Portable
HitPaw Video Enhancer
RELATED PRODUCTS

Recordit
Recordit is a screen recording and GIF creation tool that allows users to quickly capture their screen and share it with others.
Download Recordit

UltraMon
UltraMon is a utility for multi-monitor systems which provides additional features such as taskbar extensions, window management, and mirroring capabilities.
Download UltraMon