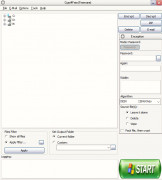 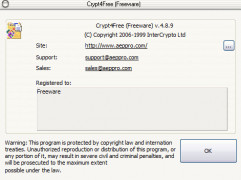 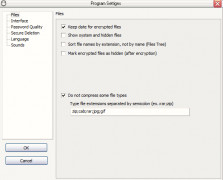 Crypt4Free is an intuitive and simple-to-use freeware license model, conceived and programmed by SecureAction Research released on 09/12/2012.

Crypt4Free support .zip file and allow users to browse and extract files we already have, already existing files and create new ones with it.

Completely free from spyware and adware making it safe

Crypt4Free can also encrypt any email text which can be sent via an app using IM ( instant message ) services, like AOL ( America on Line, Internet service provider, active in web research and software development ) or ICQ ( Software of instant messaging, which allows you to send instant messages, even to offline users like SMS and URLs: start multi-user chats and online games, transfer files, give the possibility to receive emails via POP3 and to share a remote folder, some of the features, however, are based on using additional plug-ins ) both for business and private users.

Crypt4Free also includes some privacy tools that will automatically remove URLs' history, favorites, and passwords keeping undesired '' eyes '' away from your personal details.

ADDITIONAL INFO
USER REVIEWS AND COMMENTS
Mason
Crypt4Free is going to change the way people view encryption. File encryption is a classic way of protecting any kind of data package. The program is possible to install on the Windows OS. Trust that it will work once it has been installed. The software package is free to use, which will add to the utility for many users. Think ahead and give Crypt4Free a chance in the near future. That can help anyone add security to their file packages on Windows.
LEAVE A COMMENT ABOUT THIS PRODUCT
NordLocker
EULAyzer
VaySoft SWF to EXE Converter
UkeySoft File Lock
iNinja
RELATED PRODUCTS