A great app to keep your phone secure from data thieves 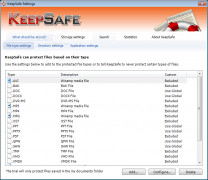 Keepsafe is a mobile VPN that offers excellent protection while not being intrusive. One key benefit of Keepsafe is the Keepsafe Photo Vault, which ensures no one will ever see your photos saved on your device, and keeps it safe from both grandma and hackers alike!

What made this software stand out from in predecessors in my eyes, is how unobtrusive it is. It stays out of your way, unlike a lot of competitors, without sacrificing your protection and safety. It protects you from malware and blocks internet connections from tracking your GPS, in case you are worried about internet stalkers, or people stealing your information about where you live. It does so via cipher AES-256 encryption meaning Keepsafe has the same level of security as military-grade applications do.

Have risky pictures saved on your phone? Keepsafe Photo Vault helps you make sure only you will ever see them

All in all, I find this to be one of the top, if not THE best protection software on the market. It's easy to use, fast to connect, and completely protects your privacy. It has so many robust features that not many other privacy apps have, especially the Keepsafe Photo Vault. For me, that was the most important factor, as I have a bunch of extremely risky pictures on my phone (I'm sure you do as well). Avoid dealing with online drama later by downloading this amazing app!

USER REVIEWS AND COMMENTS
AC
KeepSafe sounds really good. It sounds like they have made a product that is impenetrable in every way. I would be willing to try KeepSafe if the price is right. A lot of security apps promise a lot of things but KeepSafe sounds like it will deliver.
Luke
This offers many privacy apps that allow you to keep your online experience and data privacy. In a day when everything is usually accessible to everyone, this allows for one to keep their personal information safe and secure. I think that it provides an excellent platform to do so and definitely agree that it is an enjoyable way to do so.
Oliver
KeepSafe is an excellent piece of software. The support team is already superior to other companies, with them having agents who speak a large array of languages, from Turkish to Italian. The software itself is crazy sophisticated, especially for a free piece of software, with military-grade encryption as well as having back-up layers of encryption. The best part though is that not even the KeepSafe employees can gain access to it, ensuring that data cannot be sold to advertisers. In an age of increasing insecurity on the internet, KeepSafe provides a secure and viable piece of software to protect us.
Lewis
Now that I've installed KeepSafe I finally feel like my files are secure. They're virtually undetectable. Additional to this, cloud storage is massively useful in feeling like I won't ever lose my files either. Becoming a paid user is worth the money in my opinion as the themes are quite enjoyable and I need the extra storage for my large files.
Brodie
KeepSafe allows you to lock up private photos in a secure server. This means that you have to enter a passcode to access them and they can't be stolen or used on unsolicited sites. This is valuable software because these days, security is everything as well as privacy. It's going to benefit all age groups worldwide.
LEAVE A COMMENT ABOUT THIS PRODUCT
System Protect
Boxcryptor
ShowKeyPlus
TrackOFF
My Lockbox
RELATED PRODUCTS