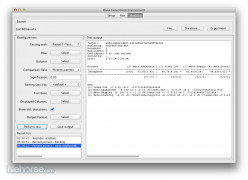 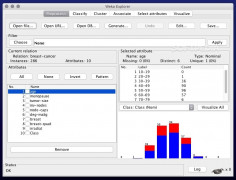 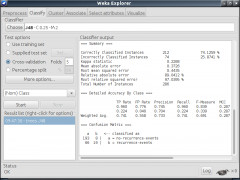 Weka is a software available for Windows platforms that are specifically purposed for data mining. Weka utilizes a large quantity of machine learning algorithms to search for and identify relevant information out of extensive amounts of data. Machine learning scrutinizes volumes of data to detect patterns and then adapt the program's actions appropriately. Weka is extremely flexible in the way that it allows the user to manipulate multiple variables to run experiments on the raw data.

It is more user flexible than other data mining tools

• Equipped with numerous techniques for data mining such as classification, clustering, and filtering

• Ability to strengthen incremental learning based on prior results

• Understandable interface for using a terminal to execute commands

Different versions of Weka require specific versions of Java to run. The most current versions of Weka require Java 8 or later. Because of some third-party tools, sometimes an older particular version of Weka is needed and can be obtained through Weka's homepage. Weka offers a Data Mining Book that outlines the software and the numerous techniques that are utilized in Weka. Weka provides updates and bug fixes available for download on the software's webpage.

USER REVIEWS AND COMMENTS
Euan Abernathy
Weka is a collection of machine learning algorithms for solving real-world data mining problems. It is written in Java and runs on almost any platform. The algorithms can either be applied directly to a dataset or called from your own Java code. Seems complicated but its not once you start to use it.
Reuben
Weka is honestly one of the best machine learning programs available for my programming job. Firstly, the software is free which is great as most machine learning programs you have to pay for with expensive fees. The software is incredibly easy to set up too, with an easy to learn process combined with an accessible GUI, whilst competitors sometimes have more complicated interfaces. Furthermore, the software also supports multiple programming languages unlike others which only support one, allowing me to use it for Python and Java. All in all, the program is a great piece of software, especially for free software!
Charlie
We are working on a new project at work and I decided to download Weka for Windows. It's machine learning algorithms that solve real-world data ming problems. Yes, the description fits what I need to get done at work. There are lot of data mining problems. It can run on almost any platform and robust because it's written in Java. I am still tinkering with it but so far I've applied it directly to a dataset and it did pretty well.
Lucas
Weka for windows is a machine for learning and solving problems on data mining, its a compatible tool for solving a logarithmic problems during learning and accessible also in data mining in data dataset. It attributes to the processing, classifications , regression, workflow and experimentation
Daniel
This software is good for all platforms. This software is useable for different types of needs. This software is recommended to high tech users. The software contains tools for data mining. It can bit overwhelming to understand the algorithms. There are several versions of Weka that fix previous bugs in the software. A good thing about Weka is that it is an open source product.
Jayden
Getting into Machine Learning? Grab your Weka and let's go! Weka 3 for Windows is fully Java based, with a ton of tools to work with your malleable data! Including pre-processing, classification, database connection, regression, clustering, etc. Depending on the size of your data needs, Weka is a formidable opponent to Python. Originally developed by a dedicated team from New Zealand, Weka has come a long way and kept up with the demands of an ever changing industry.
LEAVE A COMMENT ABOUT THIS PRODUCT
TeXnicCenter
XNA Framework
msvbvm50.dll
RTL.bpl
Node.js
RELATED PRODUCTS