A simple way to program in a fully functioning Python environment 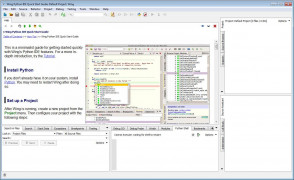 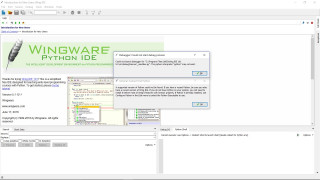 Wing IDE is a group of integrated development environments that were designed for the Python programming language. Using Wing IDE is an excellent way for a beginner programmer to get used to and learn about using Python. A more advanced programmer would find it very simpler to access a great variety of features through a straightforward shell. This program comes in three types depending on how experienced you are. Wing 101 is the simplest version for the absolute beginner, Wing Personal is for the intermediate, while Wing Pro is the most advanced version for the professional level programmer.

It comes with a debugger, which is incredibly easy to use to fix bugs and write new code in an interactive manner. It lets you step through your code one line at a time while debugging it. You can set it to watch specific values or code sections while you're testing your code.

It comes with an intelligent editor as well, which can autocomplete your code based on what's appropriate for the context. This allows you to complete your coding faster. You can set custom completions as well, so it completes codes to your liking.

Finally, it offers remotes development so you can use all of these great features on a remote host, virtual machine, or container. This will make sure that no matter what you do, you will not damage your computer in any way!

Wing IDE combines all aspects of programming and puts them into one easy to use package.

Wing IDE runs on Windows 7 (or later), Mac OS X 10.7 (or later), or Linux systems. Wing 101 and Wing Personal are both freeware while Wing Pro costs $95 for a license. Overall this is a great software suite that will have you writing professional Python code in no time!

USER REVIEWS AND COMMENTS
Farid Rajabi
It's great to automatically check for coding and this will make it easy to fix many of the bugs that occur during programming.Perhaps one of the main strengths of this tool is that the programming speed with it is higher than the similar tools
Euan
Wing IDE is the perfect software for those wanting to learn Python with ease. It's comes in three forms. The 101 from is for someone who has limited background and just starting. Next, the Personal form is for someone with some experience. The pro version is for individuals who are at a professional skill level. In summary, Wing IDE has versatility, that allows people of all programming skills to benefit and use it.
Kayden
Wing IDE is a platform for beginners to learn python. It has a debugger, it supports debugging programs written using the Tkinter, PyGtk, and PyQt toolkits also have a software product manager Wing 101 is free to use for any purpose. It is a great software for beginners who are new to python programming and it is available for Windows.
Ben Ahmed
Before using Wing IDE i would use Visual Studio, the main thing that made me switch though is that Wing IDE is very lightweight compared to Visual Studio, it takes up less space on the hard drive and it doesn't crash as much. Would definitely recommend to anybody with a passion for programming!
David
Wing IDE for Windows provides the Python language with the ideal development environment that's fully integrated. The program offers multiple tools in an all-in-one-package. If you're a programmer, you can make use of its integrated project manager. You can also use its tools to debug any graphics that you have or edit your source code. The tools are integrated so you can work more efficiently.
Lewis
Wing Python IDE is designed for Python, to bring you a more effective experience. With this software, you can easily write code in the knowledge that the Wing's deep Python code analysis will fix any errors that may have occurred during scripting. It is the fastest and most efficient way to find bugs and typos that may save valuable time. Use Wing IDEA to its full potential on windows.
Olly
The Wing IDE for windows software is complicated and requires one with expert knowledge of information technology to use. A programming language such as codes used can only be understood by people with IT knowledge.
Zac
Wing IDE for windows is a good and user friendly software, It is a debugger it will throws notification for errors in the program or line, It is very Useful for an Coder, I will suggest this to my friends and Co-workers.
LEAVE A COMMENT ABOUT THIS PRODUCT
Ptable
Peco
WebSite X5 Evolution
NTLite Free 32-bit
Wolfhud
RELATED PRODUCTS