A simplest code editor for both basic and more advanced users 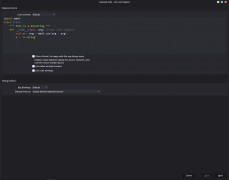 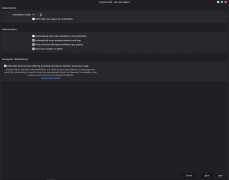 Komodo Edit is a free text editor for a complex programming language. It allows for the creation of complicated web applications by integrating multiple platforms and languages.

Komodo Edit for Windows includes both basic and advanced functions for the user. Some popular and well-known functions are autocompleted, language highlighting and syntax checking. The application uses “call tips” which is used as a pull-down menu that allow you to select different labels to assist with the editing process.

Komodo Edit is a powerful and simple to use source code and HTML editor. The user can customize the interface of the application to their likely. It gives the user the ability to have multiple files opened at the same time making it more organized and available to them when they needed it. The left panel of the application shows the list of files available. The right side of the panel is where the editing is done and has plenty of space for the user to see what they are doing during the process. There are many helpful tabs such as File, Edit and Help for the user to access but these tabs can be hidden as well. It includes a Markdown Viewer allowing you to preview HTML in real time and also supports bookmarks and macros.

Komodo Edit for Windows is a very powerful editing tool for those who code, script and build web applications. This is available on Windows, MAC OS X, and Linux.

USER REVIEWS AND COMMENTS
Dylan Fletcher
This software by ActiveState Software allows beginners and the most advanced users to manipulate and edit code. It integrates multiple forms of code and language style. It has things like syntax checking and auto form completion. So if you use multiple codes during your coding proccess then Komodo Edit would be handy to use.
Benjamin
Komodo Edit for Windows is a cross-platform editing tool that makes it significantly asier for you to design your own websites across a variety of platforms. It is compatible with pretty much any programming language you can think of, from Python and Ruby to JavaScript to template languages like Template-Toolkit. It also features tools for autocomplete as well as syntax checking. Overall I've found that it helps me write code much more efficiently.
Robbie
There is a lot to like with this software. The free version is packed with features. It supports many languages, which is good for developers who need to work with more than one. It also works great when it comes to debugging, and can be customized extensively with plugins pretty easily. If you are not liking your current IDE, or simply want to try something new, give Kodomo Edit a try!
Cooper
Komodo Edit is a free and open-source text editor for dynamic programming languages, very helpful software, you should download
William
From ActiveState, so you know it will keep getting updated. Works with a ton of different languages and will format them correctly for you. Works with HTML, Javascript, Python, Perl, Ruby, and many other languages so you don't need to use a different editor for each language. The IDE is easy to use and it will load languages in the correct format without any manual work. Also integrated support for debugging and unit testing your code.
George
Komodo edit seems like a fantastic editor for computer scientists. It has multiple language editors, Auto-complete, projects, and more! This could definitely be useful for software engineers to develop their applications and as a comp sci major, I just might start using it. I rate this a 9/10. Komodo edit seems like a professional tool for people to use.
Jamie
A daily used software. Especially if you're used to anything on Python. Uses both the Mozilla and Scintilla code base for use around multiple different platforms which is nice if you use PC and/or Linux. The software is pretty straight forward however you do get the option to use a lot of different plugins too. If you're into code, this is for you.
Jude
KOMODO EDIT IS THE BEST OPEN SOURCE PLATFORM FOR EDITING CODES, KOMODO EDIT ALLOWS YOU TO EDIT CODES IN MULTI-LANGUAGE LIKE PYTHON, PERL, HTML/CSS, JAVASCRIPT, AND MORE FOR PROGRAMMING AND WEB DEVELOPMENT. KOMODO IDE PROVIDES VARIOUS MORE FEATURES LIKE DEBUGGING AND UNIT TESTING AND MORE INTERESTING FEATURES FOR FREE
Ethan
Works well with Python and Perl which is what I needed it for. The debugging and test features work pretty well. Considering that it's free it's a pretty good program. Just know what you're using it for. It's a tool, don't blame the tool, learn how to use it.
Andrew
Komodo Edit for Windows is a must-have IDE software for programmers and coders of all levels. It allows you to create and edit code in multiple different languages on the fly, providing features that go far beyond debugging and unit testing, such as offering skins, a minimap, toolbox and many more useful features. It's the best IDE for dynamic languages to date.
Carter
I like the best Komodo's minimalistic interface of the tool. It has a cross-platform. It gives us a firefox style extension. It provides a lot of contemporary color schemes. The tool has many unique features. It has an intuitive interface. It helps to easily integrate the desktop environment. As far my experience, the tool never goes down or crashes. It is simple to use. It also allows us to create projects of multiple types. It saves time in many ways.
Riley
I've been looking for a free editor for my PC for a while now. I found Komodo Edit for Windows, downloaded it for free. I am in love. My working life is so much easier now. I use the code editor for writing code in open-source languages. It handles html, perl, ruby, and python no problem. Those are my favorite languages. Komodo is a lifesaver.
Isaac
Komodo Edit for Windows is a free software that allows you to edit text for programming languages. It also allows you to create your own plug ins. The software has the capabilities to catch errors as you write.
LEAVE A COMMENT ABOUT THIS PRODUCT
Ptable
Peco
WebSite X5 Evolution
NTLite Free 32-bit
Wolfhud
RELATED PRODUCTS