A great program for editing music 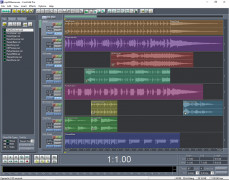 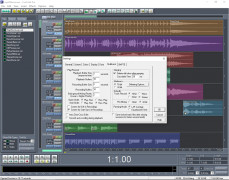 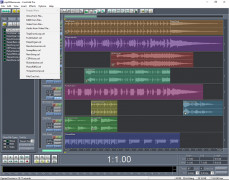 Cool Edit Pro (for Windows) is a powerful audio editing and recording software that supports just about any audio format you can think of.  It supports large audio files up to 2GB and does much more than just edit.  The amount of options you get with this software is incredible.  From basic editing to advanced, there is something here for everyone.

The wide variety of audio file formats in addition to the size of the files this program can handle makes it stand out from the crowd.  Simple design ensures that anyone can use it but would be great for an audio pro as well.  The ability to record and save media from old tapes and discs is a great feature for anyone looking to back up their memories.  There truly is something for everyone with this software.

This program is able to be used on 32 and 64 bit Windows.  They offer a demo which will have some restrictions compared to the full version.  However, to anyone looking into getting a new audio editing software the demo would be a great way to try out the program to see if they like it.  All in all a great program.

USER REVIEWS AND COMMENTS
Logan
Cool Edit Pro is an audio application that grants users the ability to edit, mix, and record their audio files. Cool Edit Pro has numerous features, such as: recording and playing audio, converting and editing audio, and also comes packed with multiple audio effects, to help take audio creations to the next level. With 64 track support, and capability for over 25 file types, Cool Edit Pro seeks to please any audiophile or audio editor.
Harris
Cool Edit Pro is a software application that will work in the windows computer system. the reason behind this program development is to give a reliable opportunity to the creator to create and edit files. And this program also being liked by many people. it can be used for playing files and make the conversion of files without any interruption. it is easy to use this simple application in modern society. the developers gave a huge opportunity to test the trial version on the computer system. it can be accessed from any place.
Oscar
Cool Edit Pro for Windows is the best music workstation out there. It has support for surround sound mixing up to 64 tracks and can be used with almost any soundcard! This advanced multitrack sound editing program supports large audio files up to 2GB as well as 25 different audio files including MP3 and WAV. If you looking for a user-friendly and powerful audio editing program you found it! Definitely recommended!
Jack
After quite a bit of research, I found this and I am amazed to see the features as they are exactly what I was looking for. This software can mix up to 64 tracks which really amazes me, way more than I need but happy to have software that is capable and powerful. also, it supports 2G file so no more breaking songs into small chunks and for people who are afraid to buy this software demo allow you to try with 30 mins songs. So go and try it and I am sure you going to buy it.
Max
Cool Edit Pro for windows seems like a great product to purchase and invest your time in. It allows you to record and edit your recordings as easily as you can think of. A good feature of this product is that it also allows the user to add effects to their sounds. Cool Edit Pro is also free and will never expire once you have it.
Kyle
I am a music enthusiast. I love anything that has to do with music. I was looking for a way to create and edit music. I downloaded Cool Edit Pro for Windows and was amazed. It does so much. I use it to create, edit and convert music files. I can convert music files up to 2 gig in size. That's huge. The effects on it are cool too. I love using reverb and distortion. Just hours of fun for me.
Rory
I love using Cool Edit Pro for Windows because it's a program that lets me edit soundtracks with ease. Not only can I filter sound using an advanced processing effect that's compatible with a range of digital signals, but I can also process files in batches for greater efficiency. Even better, this program can handle up to 64 soundtracks at the same time.
Jackson
Cool Edit Pro was one of the first audio recording programs that where computer based that I started using. I must say that this program was cutting edge not just for me at the time but for anyone who wanted to get into recording on a computer. I was amazed by the potential that this program had back then, just being able to do everything right on a computer screen and no need for a bunch of hardware gear in front of you to record your songs.
Joseph
its good and helpful software I use it for many years. It's amazing software.... Have used it for many years, great software!... Very practical and handy... Best software for Overall, the waveform editing side of Cool Edit Pro delights in its 'boffin bias', which means that there are loads of fun options to explore..its 100% safe and secure
William
Cool Edit Pro for Windows is a digital audio editor and mixer, it has two modes, waveform view and multi-track view. The guide will show musicians how to record multi track audio using a microphone. There are built in effects and noise suppression options. The software may not be compatible with Windows 10 and I believe that Adobe purchased them in 2003 and renamed them to Adobe Audition.
LEAVE A COMMENT ABOUT THIS PRODUCT
Drum Pad
Equalizer APO
RealGuitar
AV Music Morpher Gold
Karaoke Anything
RELATED PRODUCTS