Change the screen of your windows desktop to Apple-like layout 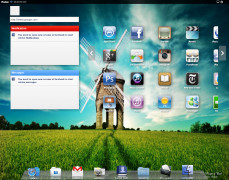 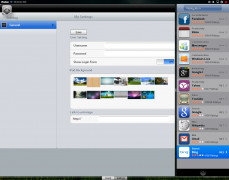 This product is a software change where an individual can install this program to change the design of their computer layout to look similar to apples unique Ios design.

Overall I think that this software change has many benefits to make the windows experience more pleasing. it allows the user to change the digital layout of their desktop screen to mimic the style of apple ios. this includes a fully functioning sidebar, with most of the apps and widgets found on the regular apple screen some of the most used apps like Facebook, Instagram, and safari work flawlessly. As an apple fanboy for many years, I find this screen change to be a wonderful idea and will definitely be installing it personally onto my desktop, because I am already familiar with its design and how it functions, and it fits my style perfectly. the best thing about this product is that it is completely free of charge and can be installed with a basic search of it on the computer. although it has a few downsides like not being able to log into the apple id, and the apps running a little slower. it definitely makes up for its realistic appearance and its great functionality. this product will help anyone already accustomed to the Apple design to be more familiar and work on the computer more efficiently.

This software allows people unfamiliar with windows to be more comfortable using the apple format they might already be familiar with.

- most legit and offers the best represantation of an apple ios on the market.

USER REVIEWS AND COMMENTS
Elle Jay
This software is something I would definitely use! I have used Apple computers for almost all my life, and have just got my first PC. It's great and I really like it, but I have no idea where to find anything! I like that iPadian has the intuitive layout of a Mac that I can use on my PC. Also, I probably wouldn't spend money on it, but since it's free that's totally fine.
Caleb
iPadian is a really useful software program. It simulates what an iOS interface looks like, but right on your Windows UI. iPadian doesn't change your Windows computer's functionality or programs. Instead, it works by providing a UI window that resembles an iPad. It's completely compatible with your Windows applications. You will need to have Adobe Air installed in order for the iPadian to work.
Luke Lumpkin
8,000 happy users can't be wrong because they bought Ipadian for windows.The software of Ipadian 10S13 gives one the advantage of possessing a simulator which features many of the Apple device features. This is an exclusive offer because only Ipadian can run Ipadian apps. Ipadian has popular studio artists in their music feature, such as Ed Sheeran, Rita Ora, and more! THe Ipadian looks great and compares favorably to the 10s look environment. You get: a browser, social network(with notifications), email client, music videos & artists, as well as, photos and free apps. Be in the "In" crowd: Buy it today!
Aiden
iPadian is a really cool and unique piece of software. Basically, it gives you the feeling that you're running IOS or Android on a laptop. This is great because it enables you to run app store games that would only be available on IOS devices, but you can play them on a full screen which is way larger, improving your overall gaming experience. The experience doesn't feel laggy or slow but feels exactly like an iPad and best of all, it's free.
Alfie
iPadian is a sleek and simple simulator for iOS. I found it extremely useful to learn the iOS interface - it feels eerily simple to the real deal. It simulates Apple's Siri and iMessage flawlessly. It's easy to download and immediately jump in to the iOS simulation. I recommend this software to anyone who might be considering switching to an iOS system - with iPadian, you can give iOS a shot before fully committing.
Isaac
iPadian is the best iOS simulator that gives users a chance to experience the interface it can be downloaded for free also on windows desktop and the new version has many inspiring features and adds a new touch to your laptop.
Christopher
iPadian is a freeware application that allows you to mimic the look and feel of an Apple iPad interface to your Windows device. It is a simulator that makes the transition from Apple to Windows so much easier, especially if you prefer the look and feel of Apple's iOS-based systems over Windows operating systems. It is important to know that iPadian will only run in full-screen mode and does not allow for the simulation of IPA apps.
Archie
iPadian is a free to download Apple iOS simulator designed for Windows operating systems, it gives users the impression of using  the latest version of iOS on a computer.  It shows the appearance, design and basic features of an Apple device but  does not create a local version of the iOS.  The program comes with many functions, it includes a quick access sidebar, iMessages, Facebook widgets, and integration with Siri.   iPadian is available in a Pro version.
Muhammad
iPadian is considered one of the best simulation devices for iOS. It provides a near exact usability as that of other apple products without the availability of the play store. It has over 1000 applications which can run on it and thus allows the user to fully grasp its potential. It's design and appearance also replicates that of apple devices and this gives us a true experience of using an apple product.
LEAVE A COMMENT ABOUT THIS PRODUCT
StartIsBack
Samsung Smart View
Neko
3DMark Vantage Basic Edition
Bad Crystal
RELATED PRODUCTS