A joystick emulator designed for Windows, including ways to use existing gamepads directly from your computer 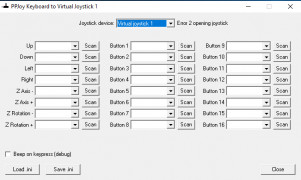 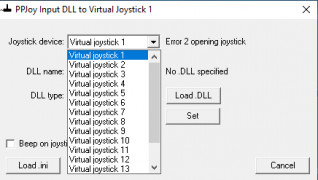 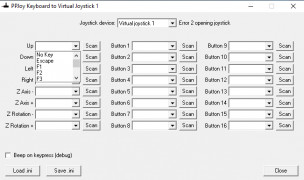 PPJoy is a Joystick Emulator designed for windows, similar to DirectPad Pro.

The drivers included allow you to use sega, playstation, NES gamepads, as well as older game consoles such as Atari by connecting them via the parallel port. The system detects what game system to adapt to, and allows the user to customize buttons to their preference for quick and easy play. It is stated to be similar to the Direct Pad Pro. PPjoy supports a virtual joystick interface which functions so that other applications can use the interface to generate joystick events through the application. There is also a keyboard-to-joystick application that uses this interface as well.

PPjoy is customizable, and easy to use.

PPjoy is in version v.078, and is 1.5 MB to download, and is available from several different websites, and functions for all except the newest operating systems.

PPjoy is also available for free for non-commercial personal use.

The driver easily supports Windows XP and 2000, and Windows 7, with some support for Windows 98, but unfortunately does not support windows 10.

USER REVIEWS AND COMMENTS
Abby Salonga
When I entered the link I found it slightly confusing but when I understand what the product is and use it for my own benefit I became so thankful that I discovered and got to use this product. It is so easy to use and is friendly to those who are not tech savy.
Kimberly Howard
This software allows you to virtually use joysticks from video game consoles on the pc so the format is the similar and you don't lose gameplay control. It doesn't take up very much hard drive space on your computer and it comes with drivers for popular gaming consoles already with the initial installation.
Joshua
This is the only program I've found that can get all my old controllers working that I haven't had drivers for in years. I mean it recognizes every single of the things I've plugged in so far, many of them that most emulators ignore or don't even realize are plugged in. Made it a must have for my emulation build I did for the living room.
Jake
Need to emulate an old,classic game, but all you have are current-gen controllers? Check out PPJoy! It’s a lightweight program that allows the user to make their controllers of all types compatible with game consoles of the past, such as, N64, PSX, Atari, etc, as well as controller input for newer games as well. So for those who are looking for that program that allows them to play their favorite emulated or newer games, PPJoy is an excellent option.
Lewis
As a gamer who plays on old consoles and has been using joystick emulators for decades now, this is by far the best one I have ever used. It is just so easy to emulate the controls of my old school joysticks and be able to use them on other, newer ones. I totally recommend this if you are a gamer and you should get PPJoy as soon as possible and your life will be so much easier.
Murray
PPJoy for windows includes drivers installed for systems like Playstation, sega and more. Its is Free installation for non commercial personal use. PPJoy allows you to virtually use joysticks from gaming consoles. This driver easily supports older versions of Windows like XP, 2000,Windows 7 but unfortunately does not support windows10 as it is not included in white list of Microsoft drivers.
Leo
“PP Joy for Windows” is software that emulates a joystick and has several exciting features. This software is specifically designed for Windows OS. The software allows for adjustments to Gamepad and joystick buttons. This software also contains drivers that are compatible with several different systems. Now comes the best part... it’s FREE to download for personal use.
Blair
If you have an old, outdated console joystick lying around that you think you can't use anymore, think again. With PPJoy, you can likely make that joystick functional again. PPJoy even works for old gamepads. Whether you have a PlayStation or a Super Nintendo gamepad, PPJoy can make it compatible with your computer. My favorite aspect of the PPJoy is that it lets me set my joystick buttons, tailored to my preferences.
LEAVE A COMMENT ABOUT THIS PRODUCT
The Sims 4
Fortnite Battle Royale
LEGO Mindstorms EV3
Fallout Shelter
Apex Legends
RELATED PRODUCTS