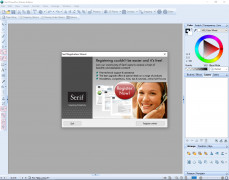 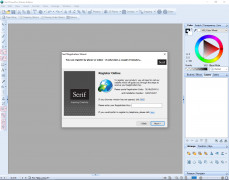 DrawPlus by Serif is a full-featured 2D vector graphics program, which also supports layers, pressure sensitivity, animation, and painting, all while retaining a vector object's ability to infinitely resize. Over 600 fonts are available as well. Though it is no longer in development, it retains a large user base due to its user-friendly layout and gentle learning curve.

With DrawPlus, you can create resizable logos, graphic elements, use Wacom pressure-sensitive tablets and pens, create and edit animations, and even create digital artwork using its oil, watercolor, chalk functions - and these just scratch the surface. DrawPlus also supports photo and image editing. You can even create animated GIFs.

DrawPlus is certainly an inexpensive way to get started with 2D vector graphics.

The latest version, DrawPlus X8, was released in 2015.

This package has a low learning curve, as far as vector graphics programs go.

Though DrawPlus, developed by Serif, is no longer developed or supported it is a capable 2D vector graphics program, with support for pressure sensitivity, brushes, paint such as oils and watercolors, stop and keyframe animations, and more. Since DrawPlus has a gentle learning curve and excellent tutorials, it remains a favorite for new and casual users. Serif recommends Affinity Designer as the successor to DrawPlus.

ADDITIONAL INFO
USER REVIEWS AND COMMENTS
Ashlei Bain
Reading about the Serif Drawing Plus, I am really impressed. The program is built with the idea of a low threshold for beginners, meaning it is fairly easy for someone to use the program. Compared to other programs, I believe that this program might be better for graphic designers along with people just starting a new hobby. My sister actually uses a program similar to this, but is interested in trying this product due to all the different features.
Harris
This is an amazing software, It fulfills all my needs, I will definitely recommend this for all my friends. The tutorial was really helpful. It is very useful for my web designing jobs. Now I am a big fan of this software. Go for it...
Caleb Shell
a windows editing software for older windows device and app.
Jayden
This is an amazingly useful tool, Serif DawPlus Starter Edition provides custom templates so one does not have to start from scratch. You can edit easily along the way and there are powerful features to be more creative with the designs. With a one-click effort the application allows to get a customized template and then edit as necessary with a personal touch. Definitely a recommended tool.
Muhammad
5 stars so far , it helped so much in my work with the huge collection of brushes and and the wide range of colors . i highly recommend this !!
LEAVE A COMMENT ABOUT THIS PRODUCT
Moho Anime Studio
ABRviewer
Muvizu
DAZ Studio
Aseprite
RELATED PRODUCTS

SmoothDraw
A digital art program to draw with
Download SmoothDraw