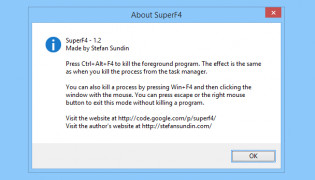 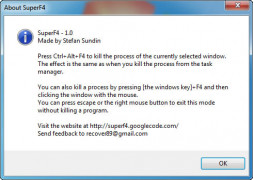 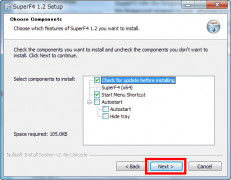 The program is very different than your typical ALT+F4 because even when you constantly press ALT+F4, some programs might just refuse to shut down.

SuperF4 kills the foreground program when you press Ctrl+Alt+F4

Features:
ADDITIONAL INFO
USER REVIEWS AND COMMENTS
Ben
SuperF4 function is different from the other function which kills the foreground program when we press the key set ctrl+Alt+F4. Apart from closing all the windows this function kill the foreground program which is useful for easy operations among working with the windows without stress with the functions.
Ewan
SuperF4 for Windows is an App used that helps users to instantly kill a process by pressing ctrl+alt+f4. It allows you to instantly close a misbehaving program
Jack
SuperF4 for Windows is an awesome program. When certain programs are running slow, or it just stops running completely, this specific program will still allow you to shut the unwanted program down. I really like this program because I am always having so many issues with getting some programs that are acting up to close. In normal cases like this, the keyboard also freezes up. This app runs in the background, allowing you to instantly kill any program that is not wanting to close on its own. This is the best invention ever. I will definitely recommend this specific program to other people that could find this beneficial.
Connor
it is a program that could run in the background of a window and has the ability to shut down any application. it so worth can be said to function as a task manager in a computer since it could creep into any task and shut it down immediately. but extensively its important to know that it is light weight in terms of memory space so no fear should be to raise
Christopher
SuperF4 seems useful in itself for gaming, High CPU consuming tasks, or as a killswitch for malfunctioning programs/unsafe programs. I would give it five stars, and place it in the highest regards. You won't find anything else quite like it. If you have the need, SuperF4 will fill it. If you don't believe me then give it a go for yourself. I assure that you won't regret it!
Arran
SuperF4 is for those users who are having difficulty with opening, closing, and/or no response from an app or program. It allows windows users to shut down a nonresponse app or program. This process is quick, efficient, and simple. Once the app or program is killed/removed there are no additional steps for the individual to complete. This device will prevent users from wasting their time on nonresponse apps/programs.
Kayden
SuperF4 allows you to use Ctrl+Alt+F4 to kill foreground programs. This is super helpful because when you press Alt+F4, some programs won’t quit. They will straight up refuse. Think of it like Windows asking the program to quit, so the choice and onus is on the program itself to quit. SuperF4 bypasses that completely. The only downside is that some games have a protection known as anti-keylogger, meaning that SuperF4 will struggle to close them.
Matthew Marmolejos
SuperF4 is a Windows keyboard shortcut utility that allows users to quickly and easily close any application window by pressing the Super (Windows) + F4 keys. It is designed to make it easier to quickly close multiple open windows, allowing users to free up system resources and speed up their computer.
LEAVE A COMMENT ABOUT THIS PRODUCT
BlackTop
Andy Android Emulator
TCPView
ShellExView
Automize
RELATED PRODUCTS