Make any window or application the topmost window 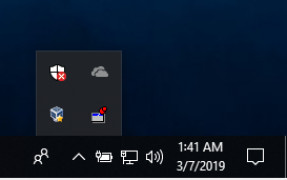 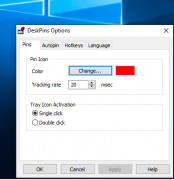 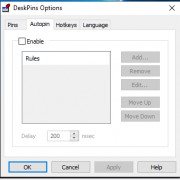 DeskPins is a free application that allows users to make any application the topmost application. This keeps pinned windows all the way forward while you are using other windows. Take a pin from the DeskPins icon and pin it to any window, making it your topmost window. ]

[DeskPins is a free software that uses very little system resources to make any of your applications the topmost application. This is useful for when you do not have a second monitor and need to have small bits of information available without switching between tabs and applications. DeskPins brings "Always on Top" functionality to any program you may use. DeskPins is intuitive to use. It is user-friendly and once launched stays in the Windows System Tray. This enables the user to grab pins easily to put applications on top.

Can be added to any program

To use, click the DeskPins icon in the Windows System Tray. Then grab a pin and drop it on any window you wish to make the topmost window. Pins can be easily removed. Just click the pin again to remove it.

Hotkeys works within DeskPins. It also gives the user the option to enable autopins. Hotkeys can be used to toggle between active pinned windows and to enter the pin mode.

DeskPoins works perfectly with most applications and application types. DeskPins works on several kinds of windows such as normal windows, skinned windows, or a DOS command window. It has been found that DeskPins does not always work on newer applications such as Groove Music in Windows 10.

ADDITIONAL INFO
USER REVIEWS AND COMMENTS
Luke
I found DeskPins to be somewhat confusing. I do not feel as though there was enough visual content to support the idea of what the product actually does. I do like that it is a free application which may make someone more apt to try it.
Jackson
Deskpins is a valuable free application the lets users keep there most important applications pinned while using windows. There is no limit to the amount of pins the user can use and it is intelligence based. It is compatible with most windows versions and works with hotkeys as well. They can be easily removed if needed. Deskpins is a wonderful free application.
Lucas
Wow! DeskPins has completely streamlined my overall user experience on my laptop! The apps I use the most are on the top and the least are positioned to the bottom. The interface is so easy to use, it becomes second nature in no time. I recommend this application to anyone who wants to simplify and enhance their desktop experience.
Tyler
This is an application used to keep an application at the top. It is known to be identical to the "Always on top" function. This is a new user friendly as well. Ideal for anyone who wants to keep an application on top of their other windows.
Ryan Ivey
It's good for multitasking on windows OS, however some of the cons such as not compatible for old versions, windows vista or other older OS. This software is a great multitasking tool to prioritize task by pinning it. In this time, I don't think anyone might be using older version of windows below windows 7, So, it's great tool for those who work on different tasks at the same time...
Lewis
DeskPins for Windows is a software that allows you to pin multiple times and keep the screens at visual whenever you want it is clever and handles more than one task at the time
Angus
This can be used for any application topmost. This helps keeps a lot of applications up and available so people have better luck organizing things on their computer. This is a very helpful platform for people with windows computers and such. I think it is not usable for people with macbooks and apple products. Running this application on windows 10 is probably the best bet due to the fact that it is the most updated system at the moment
Aiden
DeskPins is a lightweight Windows application that can constrain running projects to keep steady over others. Fundamentally a freeware device that brings "Consistently on Top" usefulness to any product arrangement on your PC, DeskPins is extremely simple to utilize, making supposed "pins" to keeps applications on top. When you dispatch it, DeskPins places a symbol in the Windows System Tray that allows you in a flash to empower the application and hence embed another symbol in the titlebar of each running interaction to assist you with keeping it on top. Despite the fact that it might sound a bit troublesome, DeskPins is focused on the two novices and more experienced clients, with a couple of settings to play with accessible in the "Choices" screen.
Isaac
DeskPins is a best application program to pin frequently used application on system. You can pin any application programs by using DeskPins application.
Dylan
it lets me keep my screen and computer display organized, which in turn boosts my productivity since I don't need to hunt around for the windows and tabs that I need. I love that it gives me the ability to pin the applications and tasks that I use the most so I have easy access to them at all times.
Ethan
DeskPins for Windows is an app which allows for the management of various open tabs and windows in a desktop. Its main purpose, which it accomplishes, is to pin the more relevant windows to the top of the desktop, increasing productivity and promoting accessibility. Multitasking is easily possible with this app and it is very compatible with the operating systems, allowing for the activation of the Hotkeys function.
Jamie
The first thing I like about this app is that it’s free, secondly, it’s super easy to use. It’s extremely helpful in pinning a window open so you don’t lose your spot especially if you need multiple windows open. This rally helps with multi-tasking and productivity. I have found it keeps things more organized as well cause you to know where everything is
Brodie
DeskPins is a neat, simple, yet extremely useful software that allows you to pin certain files or programs to your desktop and access them easily with just one click. Think of it as turning your open programs into "widgets" for you desktop or laptop. This allows you to readily see and pull up relevant information without being overwhelmed by open windows or multiple open tabs. DeskPins runs on older versions of Windows, and is best for those using an older software. It can still perform quite well, and is worth checkout out for its simple interface, and usability.
LEAVE A COMMENT ABOUT THIS PRODUCT
StartIsBack
Samsung Smart View
Neko
3DMark Vantage Basic Edition
Bad Crystal
RELATED PRODUCTS