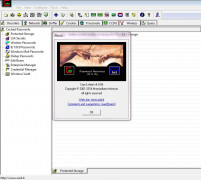 .It is almost always abbreviated as "Cain". It is a perfect tool that is responsible for the recovery of passwords exclusively for Microsoft Windows. The tool manages to recover many types of passwords using a specific method such as Sniffing, a network packet, also has the function of being able to crack different types of password hashes using methods like dictionary attacks, brute force, and some attacks based on cryptanalysis. The different attacks of Cryptanalysis can be made using the method called Rainbow Tables, which can be generated by a program called Winrtgen.exe integrated into Cain & Abel.

Different antivirus manages to detect this tool as Malware. Some antivirus such as Avast! "Extremely dangerous software" and others such as the Microsoft Windows security suite classify it as "Software with potentially dangerous behavior"

Cain & Abel has been developed with the hope that it can be useful for network administrators, teachers, consultants, forensic, security software providers, among others who can take advantage of each of its purposes.

You can recover passwords hidden behind the asterisks.

In conclusion, it can be said that this application can achieve very good things if given an appropriate use, the app is very good and also can be said to be very effective at the time of being used although its interface is a bit difficult to manage You can learn to use it in the correct way. I consider that just as the application can be used for many good things, it can also be used for negative things for society, since social networks can be hacked, and each one of the person's life can be discovered, besides it can be used against the people, getting their privacy broken and leaving it uncovered, In short, the tool can be used very well, but it can also be misused if the person has bad intentions.

HP SimplePass
With compatible HP laptops, SimplePass allows you to use your fingerprints
Download HP SimplePass