An open-source browser that tries to be speedy 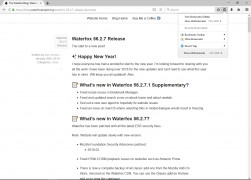 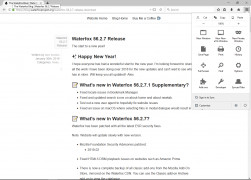 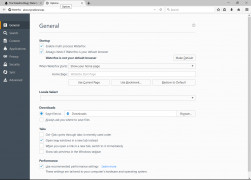 Waterfox is forked from Firefox and it is for 64-bit operating systems like Windows, macOS and 64 bit Linux and Android.  It's goals are to be speedy and ethical while maintaining Firefox's legacy extensions.  What makes this browser a little different is that privacy is a big deal to them.  They don't sell your personal information like a lot of other companies, browsers, and websites.  You are in charge of your protection and have the option using their privacy tools to decide who sees what.  They are so committed to protecting your privacy that they don't even collect any of your personal information.

Another wonderful feature is that it is super fast and efficient.  It uses less RAM than Chrome so everything will keep running at top speed so you never have to worry about trying to complete that last minute research job on time.  Speaking of work, if you are a multi-tasker, your job just got easier.

Since Waterfox is a multi-process browser you can have as many tabs open as you want and they will stay fresh and you won't have to wait for them to reload every time you need to switch between your open screens.  And the last note I want to touch on is that Waterfox is not just all work and no play, if you are a gamer then this browser is for you.  For your 3D games, you are able to play at real-time speed and achieve better performance for your online gameplay.  Since Waterfox's browser is so powerful you don't have to sit and wait through lag times, in fact it speeds up ping times and enhances overall gameplay.

Uses less RAM than Chrome so browsing is faster

In conclusion, my opinion is, this is an amazing browser that enables me to do a lot of different things I can't do on Chrome or Firefox and I would recommend anyone to check out Waterfox and look up all the amazing features and extensions that it has to offer.  From, work to gaming, this browser has it all.

You need to have at 64-bit operating system.  There are official releases for 64- bit Android and Linus along with macOS and 64-bit Windows, which includes a portable version.   Waterfox can be downloaded for free at: https://www.waterfoxproject.org/en-US/waterfox/new/

OLD VERSIONS
Waterfox 4.42 (71.91 MB)
Waterfox 7.0 (12.67 MB)
Waterfox 8.0 (15.01 MB)
Waterfox 8.0.1 (15.13 MB)
Waterfox 9.0 (14.28 MB)
Waterfox 10.0.1 (16.47 MB)
Waterfox 10.0.2 (16.47 MB)
Waterfox 16.0.1 (24.88 MB)
Waterfox 18.0.1 (30.48 MB)
Waterfox 24.0 (23.99 MB)
Waterfox 27.0.1 (28.13 MB)
USER REVIEWS AND COMMENTS
chris C
The product looks like a useful product especially since it can be used for multiple browsers. It is also useful because it is faster than other applications and can be used on multiple operating systems such as max, windows, linux.
Ruaridh
Do you remember before chrome was around? When firefox was king? When internet explorer was slow and buggy and firefox was running at light speed? Well obviously firefox slowed down and became almost as bad, but this fork of it reminds me of how firefox used to run. Waterfox is for the people who want a fast browser without all the tracking google chrome does.
Oliver
This is an open-source browser, which claims not to have telemetry and data collection. The source code is based on Mozilla's code. Therefore it has familiar with Mozilla user's interface. It has synchronization of all bookmarks, history, etc. with other devices, which uses the same Waterfox. Bing is a default searching engine. Original code was written for Linux, and then adapted to Windows
Fraser Styles
Waterfox for Windows is a web browser that allows you to surf the internet. It uses legacy extensions that were cut from Mozilla's Firefox browser. It is named after that program, as it is a fork of it. Waterfox can be considered a counterpart to Firefox.
Charlie
Waterfox seems to be overlooked by competitors such as Google and Firefox, making it overshadowed yet underrated. For one, the privacy on Waterfox is outstanding with there being no telemetry basically meaning there will be no tracking information, maintaining the integrity of your data and not giving it to advertisers. Also, on a personal note, there's a lot of themes to choose from whilst being easy to install in a second. Lastly, I love how the only thing Waterfox sends is your OS and browser version for updates, instead of sending millions of pieces of personal information. Overall, Waterfox is incredibly useful for someone who cares about their privacy.
Blair
Users know that much of their Internet success, or lack thereof falls on web browsers. Most of us have several. So, why get another one? Waterfox for Windows has two major selling points. Based on the high-grade, much-lauded Mozilla platform, Waterfox for Windows is lightning fast. The browser is created with Intel’s unique C++compiler, already renowned in the industry as an extremely powerful compiler. Secondly, Waterfox makes minimal use of telemetry. So, in a direct U turn from the pattern of most browsers, Waterfox does not go after user data. Collection is kept to a strict minimum. The system blocks trackers. Install and import from your other browsers with a simple click. This may be the browser you use most of all.
Cooper
The Waterfox Internet Browser looks like a very clean and neat browser. It has a much cleaner interface compared to other browsers I've seen. It looks like it has very nice security features to keep you protected while browsing the internet. I also really like that you can move certain things around in the interface to customize it to your liking.
Leon
Waterfox for windows is a browser of sorts. I gives you access to Firefox on lesser devices such as windows 7 and such, etc. I love using it on my older laptops, etc. Its a great product and I use it because I love Firefox browser on most of my devices! I know you'll find more use out of it as you go as long as well. It is limitless the possibilities you will have with this!
Nathan
I love Waterfox because it lets me use my browser of preference, which is Mozilla Firefox, but gives me the high-performance version of it. It basically optimizes my browser so that its output is faster and search results are returned more quickly, and that allows me to work more efficiently as a result (which is always a plus in my book!).
LEAVE A COMMENT ABOUT THIS PRODUCT
Maxthon
Eureka!
SeaMonkey
AOL Shield Browser
Sleipnir
RELATED PRODUCTS